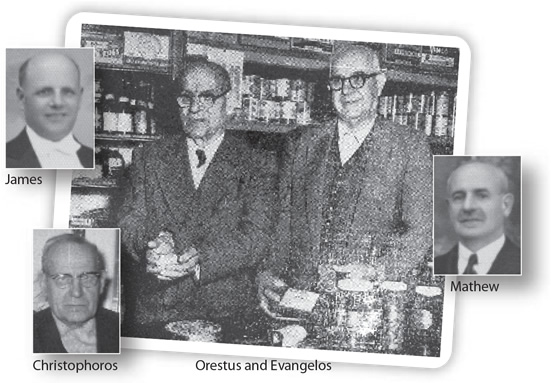 THE FIVE BROTHERS COME TO AMERICA...

Stamoolis Brothers Company has been a tradition since 1909 when five brothers, from Chios, Greece, established not only a business but a passion to bring the finest in Greek and Mediterranean foods to you.It started in America in 1907, when the five brothers came to New York City. After working in Greek restaurants for two years, they decided to open a retail store specializing in food imports - the store was a success!A few years later, the brothers came to Pittsburgh to join their brother-in-law who had a similar store on Market Street. Together they opened the store and warehouse at the present Penn Avenue location.The family consisted of nineteen children living in the village of Kallimasia, Chios an island in the eastern Aegean Sea close to the Turkish coast. Their father, a food merchant by trade, dealt primarily with the sale of mastic gum, a natural and rare tree resin which comes from a bushy tree that only grows on the southern side of Chios. Mastic was used as the first natural chewing gum as well as in pharmaceuticals and culinary specialties. Other foods he sold in Greece were olives, olive oil, cheeses, lemons, honey, almonds and local produce.Visit the present day store and the experience might remind you of the days when the five brothers ran it. The exposed brick, antique wide-plank wood floor scarred from the thousands of customers shoes, the smell of spices, cheeses and meats that permeate the air all bring you back to where it started.Even though it's been over 100 years since the brothers landed in America, the Stamoolis family’s devotion and passion to ensure the same quality of products and personal service is continued by Gus Stamoolis, son of Orestus, along with his family and a number of dedicated employees.